Home of edible weed walks in Melbourne, and the publication:
The Weed Forager's Handbook: A Guide to Edible and Medicinal Weeds in Australia 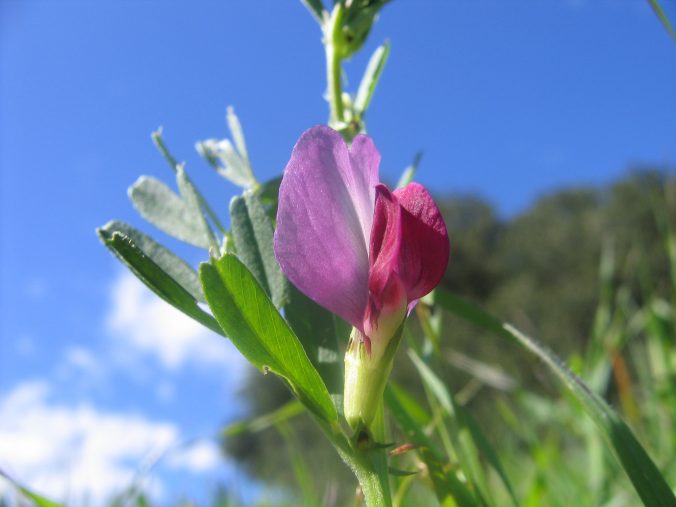 Vetches — the Vicia species in Australia and their safety

So I have been eating the odd bit of cooked greens from common vetch. I find it pleasant enough if a bit fibrous. The seeds however offer the potential of a serious staple food being full of protein and are used as animal feed sometimes. But they also have some toxicity concerns. So here’s a first pass on considering the value of adding vetches to your weed eating diet.

Pretty much all the Vicia species in Australia are listed as edible by the Plants for a Future database. The exceptions are Vicia disperma (two seeded vetch) which is relatively rare and has very small leaves, and Vicia benghalensis (purple vetch) which is limited to south west WA. It’s not that these two are considered particularly toxic, just there’s no documentation (I’ve found) of them being eaten traditionally.

Wikipedia says of our most common vetch (known as ‘common vetch’), Vicia sativa:

Common vetch has long been part of the human diet, as attested by carbonised remains found at early Neolithic sites in Syria, Turkey, Bulgaria, Hungary and Slovakia. It has also been reported from Predynastic sites of ancient Egypt, and several Bronze Age sites in Turkmenia and Slovakia. However, definite evidence for later vetch cultivation is available only for Roman times.

I can’t find records of human poisoning by vetch greens, but nevertheless there are toxins in the seeds at least, and good reasons why they haven’t been commercialised and perhaps also why they fell out of favour historically.

Indeed there have been controversies about Vicia species being substituted for lentils and an illegal operation was uncovered by South Australian biochemist Max Tate:

In 1992 my student Dirk Enneking and I exposed in Nature, a multimillion dollar substitution operation. In this deceptive export trade, toxic seeds of the common vetch plant (Vicia sativa L) had been dehulled, the exposed orange cotyledons coated with a thin layer of vegetable oil to deepen the colour and then sold as cheap red lentils (Lens culinaris) in third world countries.

He notes that vetch seed cannot be legally sold for human consumption in Australia.

Different species of Vicia have more or less of the first two categories. For common vetch, it’s mostly about the neurotoxins.

… cases of [animal] poisoning by Vicia species continue to be reported. These can be grouped into those caused by V. sativa and its related species (cyanogenic glycoside Vicianine: HCN poisoning; and anti-nutritional effects of -cyanoalanine) and those caused by canavanine containing species (V. villosa, V. benghalensis, V. ervilia etc.).

Cooking to diminish the neurotoxins

Some sources are encouraging. Liener (1962) says “most of the antinutritional or toxic effects of legumes can be partially or wholly eliminated by proper methods of cooking.” And Amarowicz (2011) says more specifically that “the cooking procedure and technological process can reduce the content of the neurotoxins in seeds of Vicia sativa.”

But which methods, and by how much? Digging deeper has only increased my reluctance to eat them. Ressler (1997) found that neurotoxins in the seeds are diminished significantly if split and soaked before cooking.  But they are not diminished much if the bean is soaked whole.

In fact it would be a good idea to not only split the beans but initially soak them in boiling water. Soaking whole beans in cold water actives growth and can actually increase the levels of neurotoxins. (Rathjen, 1997)

Leaching them in water may require about eight days. And pressure cooking for eight hours (!) can diminish the main neurotoxin by 90%, however in the process may create a different neurotoxin. (Rathjen, 1997)

In my research it’s so far been unclear if the leaves of common vetch (Vicia sativa) contain significant quantities of the toxins associated with the seeds. I suspect that cooked, given no historical accounts of problems, they are safe to eat in moderate doses. But given the cooking complexities, I have no intention of using the seeds outside perhaps of a run-for-the-hills scenario.

Enneking, Dirk. “The Toxicity of Vicia Species and Their Utilisation as Grain Legumes,” 1995.

Eating free wild food is just one of 51 tips in our new book: The Art of Frugal Hedonism: A Guide to Spending Less While Enjoying Everything More! Order both books (and save on postage) below.

Or read testimonials and order a copy at FrugalHedonism.com.

You can order The Weed Forager's Handbook, and the Top 5 Edible Weed Poster together (and save on postage) below.