Home of edible weed walks in Melbourne, and the publication:
The Weed Forager's Handbook: A Guide to Edible and Medicinal Weeds in Australia

tl;dr: A bit. If you use it topically medicinally, bandage it up to keep your skin out of the sun.

One of the edible weeds we do a short profile on in The Weed Forager’s Handbook is cobbler’s pegs (Bidens pilosa). It’s not one of our favourites gastronomically, but it’s not too bad either.

One thing that’s come up on the Edible Weeds, Wild Plants & Foraging in Australia facebook group is that the plant is considered ‘phototoxic’. This comes from the Victorian Resources Online website which says:

The roots, leaves and flowers are strongly phototoxic. Substances isolated from the leaves can kill human skin in the presence of sunlight at concentrations as low as 10 ppm (PFAF 2007).

That’s a direct quote from the Plants For A Future database, which in turn references James Duke’s book Medicinal Plants of China (1985).

I don’t have the book but it seems to be a reference to a 1979 paper by Wat et al., “Ultraviolet-Mediated Cytotoxic Activity of Phenylheptatriyne from Bidens Pilosa L.” from the Journal of Natural Products.

The substance phototoxic to skin cells at 10 ppm is the titular phenylpetatriyne (abbreviated to PHT). The prevalence of PHT in Bidens pilosa they report as “400-600 ug/gm fresh weight.” (I.e. around 500 ppm.) In the experiment the skin cells were petridish-cultivated, then shaken around in a PHT solution for 30 minutes before exposure to the light.

If it was blended up B. pilosa that solution would need to be about 2% fresh plant matter in water to reach 10 ppm PHT. In practice I imagine it may need to be higher due to competition from all the other substances in the plant to pass into the cell membranes. So, fairly unusual circumstances.

Should we be aware of this / worried about handling Bidens pilosa? I suspect, given that skin damage is not a thing I’ve ever heard people reporting when weeding it, and googling variations on the theme of “bidens pilosa skin damage photosensitivity” brings up no anecdotes I can find, that it’s probably not an issue to be concerned about when weeding.

But if you are applying it topically medicinally (it is a traditional medicine for wound healing) it might be an issue.  I did find the following reference in a Brazilian paper:

“Bidens pilosa, a herb known as hairy beggarsticks, often used in Brazil and other countries in the topical treatment of dermatosis, is frequently associated to the aggravation of the dermatologic condition by the own patient. It is described as having antifungal, antibacterial, and antiviral properties. However, it contains phenyl heptatriene, 7 a phototoxic substance. This helps to explain the high number of cases of worsening or development of eczema in areas exposed to sunlight after topical treatment (immersion baths) with hairy beggarsticks seen in dermatologic practice.”

If anyone has insights or personal experiences, please let us know!

With Costa and David at SLF

Down at the Sustainable Living Festival last month, Adam caught up with Costa the most awesome writer of the foreword to The Weed Forager’s Handbook. 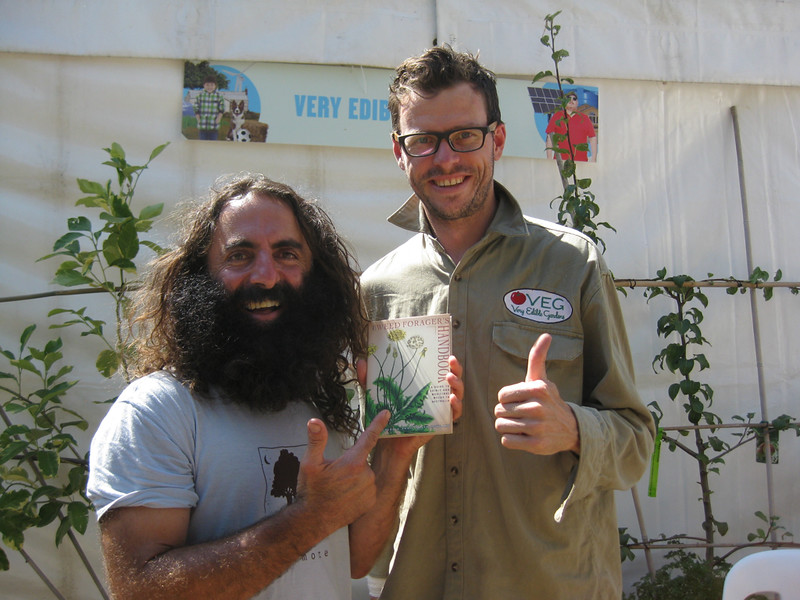 And David Holmgren was down there too. David is the co-originator of the permaculture concept, one of our heroes, and gave us feedback and a lovely review on the back cover of the book before its release. 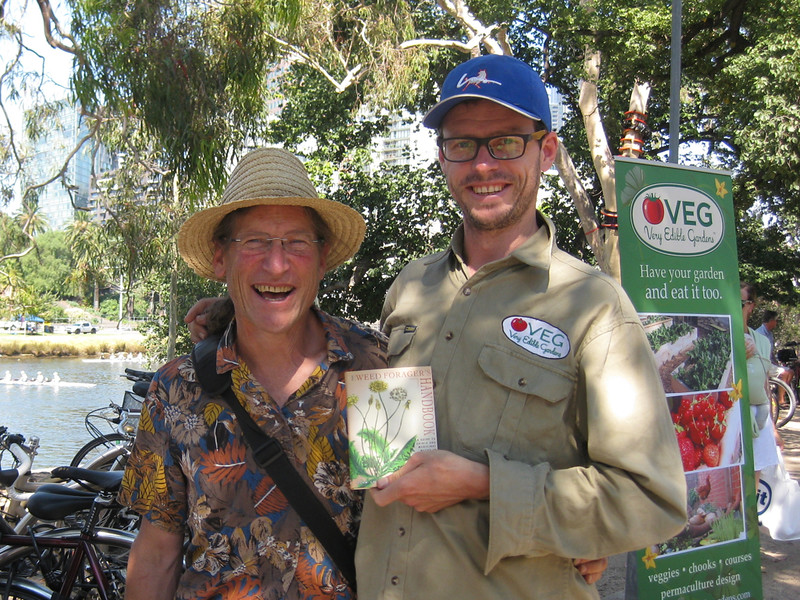 Taryn from Retro Food for Modern Times blog makes a beautiful looking weedy salad, and has written up some notes about her weed foraging experience after coming on a weeds walk last month. Check it.

Eating free wild food is just one of 51 tips in our new book: The Art of Frugal Hedonism: A Guide to Spending Less While Enjoying Everything More! Order both books (and save on postage) below.

Or read testimonials and order a copy at FrugalHedonism.com.

You can order The Weed Forager's Handbook, and the Top 5 Edible Weed Poster together (and save on postage) below.